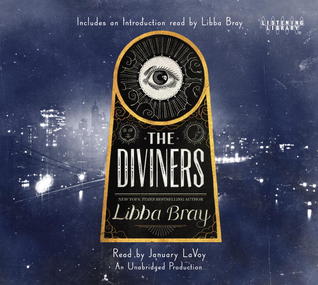 An associate from work recommended this to me.  She had seen the trailer and read the story, knew I listened to audiobooks from a previous conversation, and thought I might especially enjoy it in audio format.  (She mentioned how creepy the song in the trailer was and thought it might be in the book.)  So why don't you view the trailer first...

Personally, I did enjoy the book.  It took awhile to get each of the characters parts... I liked some better than others.  But I was pretty into it.  There were some scenes where you were taken away from the characters to set the overall tone of what was going on everywhere.  Like a widescreen shot, but the visual is in your mind.  That worked for most of the book, but it happened on the last disc, after much of the immediate story had been settled (presumably to set up for the next book), and I strongly disliked it.  The last disc irritated me beyond belief.

But wait!  I can't believe I'm only now getting to the setting.  This is set in the 20s (primarily in New York).  Before the Great Depression, during the days of flappers, and speakeasies, and all that.  I think the only book I've read set in this period before this was The Great Gatsby.  So it was really different (for me, at least).  And the setting was almost like a character of it's own.  Mostly fun (at least outwardly), but with a dark side.

Anyway.  If you like creepy (cuz this was) and YA horror, with a dose of mystery and history, definitely give this a shot.  There is a strong paranormal aspect.  Some sensitive issues are mentioned... bigotry and abuse, for example.  Things to keep in mind.

Oh, and lest I forget.  The narrator did a nice job (from my Midwestern perspective).  People from the different areas of New York all got different tones and accents that added character.

As for the next book, Lair of Dreams is due out April 2015...  I kind of wish this was a stand-a-lone, but the ending definitely indicates otherwise.  And I'll probably read/listen to it.
Posted by Jo at 10:22 PM