A Brew to a Kill 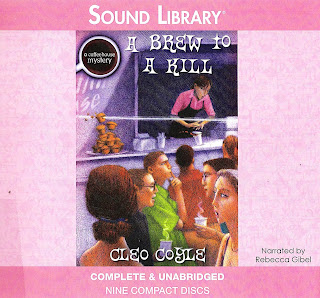 Title: A Brew to a Kill


Official trailer:
AudioGo A Brew to a Kill sample:

I requested the local library purchase this after seeing it reviewed on Reviews By Martha's Bookshelf. That is, I already had the print copy on hold, and I requested the audio version. I have to say, I did not care for it in audio. I adjusted eventually, but I'm going to proceed with the story in print. I can't help but wonder if the problem might have been listening to it after reading the 10 previous books. I had already established voices, etc. in my own imagination, and now everything was topsy-turvy.

Regarding the story itself, it was interesting. I didn't guess the murderer until close to the end - only once I understood the motivate and connections. I really appreciated some of the new characters, especially Max Buckman. Of course, I've been following Clare's relationship with Quinn throughout the series.

Something that I found intriguing in a peripheral way was the fundraising aspect. Both the ideas Clare and gang were hoping to build and how they went about trying to get the support to follow through.

The next book in the series, Holiday Buzz, is one I would have read before the holidays if I hadn't been waiting for the audio on this one. I don't know when I'll get to it, but preferably before next Christmas season.
Posted by Jo at 4:14 PM