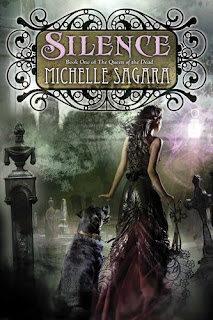 Series: The Queen of the Dead, Bk 1

I was looking for more ideas for Canadian books to read - this time on NoveList (a great resource if you get the chance to try it - I have access through my local library).  I've meant to read Michelle's books before; I've heard such great things.  But now I saw a first in a new series (what better way to try an author for the first time).  And the potential storyline intrigued me.  There's the whole seeing the dead thing.  Plus check out that cover!

I was a little concerned when the first scene started in present tense, but the remainder of the story was in third person (thankfully).  And once I started reading, I really like Emma as a character.  She's been through a lot.  She's honest about her reactions to everything she's been through, saying she'd gone through periods of self-pity, etc.  Beyond that she's a good friend.  Even when she wants her space.  As her friend Ally explains to another character, Eric, she kind of holds everyone together.  But she's especially great with Michael.

I found myself very pleased with how the character Michael was portrayed.  He's a high-functioning autistic.  And his character has such depth.  I'm not especially close to anyone with autism (I have a couple cousins with autism, but they live far away and are quite a bit younger), so I don't have any personal connection, really.  But that doesn't mean I can't recognize when an issue is addressed well.  In this case Michael goes to school and has a group of friends that keep his environment calm and steady... or at least as much as possible when dead people start showing up.  That all made sense when I read in the "About the Author" that her older son "taught her a lot about ASD, the school system, and the way kids are not as unkind as we, [...], are always terrified they will be."

Anyway, the friendship aspect was wonderful, but that wasn't even the primary focus of the story.  The main focus is Emma's new powers, new student Eric's secretive awareness of what is going on with her, and what that all means.  The story was even more interesting than what I hoped, and I look forward to reading the 2nd book in the series, Touch (due out, I believe, May 2013).