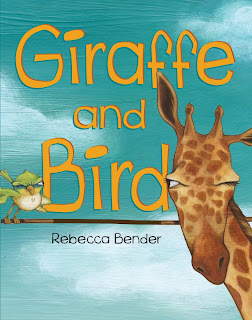 After reading Don't Laugh at Giraffe, I had to read the book that preceded it as well.  Unfortunately, my library doesn't own this so I was left waiting for ILL.  I read it and jotted down some notes before I returned it.  Too bad I promptly misplaced them.  So my memory about what I wanted to say is shaky.  My apologies in advance.

Like Don't Laugh at Giraffe this one emphasizes vocabulary.  One of them (can't remember which) can't abide the other.  One of them can't stand the other.  Etc.  They finally part ways, but then they discover maybe they'd be better off with each other than alone.  I guess it's a good example of a symbiotic relationship.  I had more to say, but I'm afraid it's gone now...

I found this on the new books rack, thought it was appealing, read it on my lunch hour, decided to check it out... And I did eventually read it to one of the kiddos.  I found Viola's imagination and the way she made everything so much more appealing to little brother Ferdie charming.  The illustrations are great as you can see each scenario from dinosaurs to aliens unfold around the setting of their house in color.  There's something so charming about books that emphasize the child's imagination.  The only part that fell slightly short for me was the ending when Viola runs out of ideas to convince Ferdie to eat his ravioli.  It was just so abrupt.

While I was looking up the links for this I discovered:

1. This is another accidental Canadian book! Cybèle Young lives in Toronto.
2. There's actually another book around Viola and Ferdie titled A Few Blocks in which Viola convinces Ferdie to go to walk to school using similar techniques to this one.  I look forward to trying that book as well.
Posted by Jo at 8:59 PM