Sketch Me If You Can 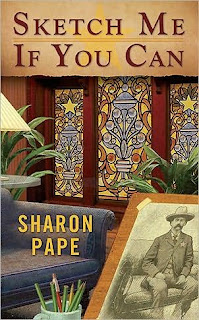 Title: Sketch Me If You Can

Let's be frank.  I've been going through a reading slump.  I'm sure as my fellow readers, you understand that said slumps don't really reflect the quality of the books you're reading.  I was just having concentration issues among other things.  Please keep that in mind when I say that I read this over the course of a few weeks.

The idea of a mystery series centered around a sketch artist really caught my interest.  And then I found out there was some paranormal aspect (a ghost as it turns out), and my interest was further peaked.  But it still took me awhile to read this book.  I kept offering it as a possibility for my Cozy Cull giveaway and while no one actually requested it, as soon as no other requests were made, well... that was all the motivation I needed to finally get started.

Rory is a great character.  She's a police detective, but because her job is sketch artist she's pretty under-utilized outside of that role.  And she's starting to find herself in a rut of sorts.  But she has recently found herself the beneficiary of her uncles house and PI agency when he passes.  And suddenly she finds new doors are opening, along with her eyes and her perception of the paranormal.

While Rory is on the police force, I believe this can still qualify as a cozy mystery.  Among other things, the mystery du jour is something Rory is investigating outside of her regular job.  But call it what you will, it's an fun mystery.

I did guess who the murderer was, but enjoyed Zeke (the ghost) and Rory's way to figuring out who and why (which I did not guess).

I really hope to read more of the series.  The second book, To Sketch a Thief and the third, Sketch a Falling Star are both out and available so I should be able to move forward with this series soon.
Posted by Jo at 11:57 PM