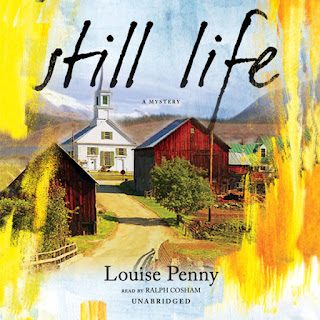 I decided to listen to  this after skimming through a Wikipedia list of Canadian authors.  I recognized the name Louise Penny right away.  I remembered pre-processing (putting the barcodes on, etc.) this audiobook.  I was even more sure of my decision when I found out it's the first in the series.  So once I finished the SEAL Team Six audio, I checked this out.  At first I had some difficulties.  There was the accent (British) and the French words and names... On top of that, perspectives switch in a way that I suspect would be easier in print.  But soon enough I caught on.

The writing was good, though a bit more descriptive than I prefer at times.  A scene would be set with loads of analogies and, well, you could call it poetry in a way.  But I was reading a mystery, and I'm not one for much description anyway.  On the other hand, when I really listened to the imagery it was quite beautiful.  So if that IS your thing, this would be a positive point.

While description isn't my thing, characters ARE.  And this book had plenty of varied characters to learn and get to know.  There are the residents of Three Pines: Clara and Peter; the victim, Jane; Ruth and Myrna; Gabri and Olivier; Ben; and many others.  Also part of the story are those investigating.   Chief Inspector Armand Gamache, of course.  But also Jean Guy Beauvoir, Isabelle Lacoste,  and Yvette Nichol.  That last, Nichol was one that became intolerable, but which I actually liked and sympathized with longer than most of the characters in the book.

Funny thing.  Since this was an audio, I had to go searching for some of the names and spellings.  In the process I came across the Goodreads page and reviews.  It seems the characters are either applauded as being well developed or criticized for being unlikely.  I'd say it depends on the character in question.  However, considering they made the story for me, I'd lean toward the first opinion.

As for the mystery part of the story, this was mostly a watch the characters until the answer jumps out at you type.  I had suspicions as to the murderer that I started to doubt with all the red herrings, but then had reaffirmed at the end.

Since this is for the Canadian book challenge, I feel I should mention something in regards to the Canadian aspect.  First, Louise Penny is Canadian (born in Toronto, residing in Montreal).  The narrator, Ralph Cosham, is not Canadian.  One of those Goodreads reviews criticized him on this, and I could see her point (though his description says he has won the title "Audio Best of the Year" multiple times, so he's apparently supposed to be good).

The story itself is set in a small town in Quebec.  I found a few things of interest related to the setting.  One was a look into English/French relations within Quebec.  I knew that it has a large French-speaking population, but knew nothing of the politics.  Also interesting was the look into the Sûreté du Québec, which I (again) knew NOTHING about.  Yet another was how American some things sounded to me.  I guess I hadn't thought about how sharing a border would make for such similarities (I'm drawing a blank now, but there was something that surprised me toward the beginning of the book).

Since this is MUCH longer than I would normally go on, I'll leave off now.  But I would be interesting in reading more of this series in the future.
Posted by Jo at 11:12 AM