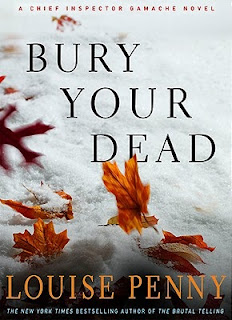 It's the next in the series, it fits The 7th annual Canadian Book Challenge, and I wanted to know what happened after the way the last book in the series ended.

This book was full of drama with 3 different cases being looked into.  I was interested in all three for different reasons, but I'm not sure how to discuss them without giving too much away.

One of the mysteries was the case Gamache was actively assisting with.  A case that involved a literary and historical society (referred to as the Lit and His - pronounced Hiss).

I assure you this is one of the aspects that intrigued me.  It was a library.  It was a historical society.  It brought another look into the Quebec French/English relations - something I know practically nothing about outside of this series.

And Gamache was able to take Henri (his dog) practically everywhere!  I found that constantly intriguing.  I learned in high school French classes that in France dogs are allowed where they never would be in the U.S. (minus assistance dogs).  But I didn't know this was true for Quebec, and even if I had known... He took his dog to the library!  I would love to take my sister's dog to the library/post office/etc.

Another of the mysteries was not necessarily new, but looked at from a new perspective.  I have to say, throughout this part of the mystery I really found myself liking Beauvoir (I suppose I've grown to like him more as each book progresses, but this part was a spike on an otherwise slight incline).  Something about how he was handling the situation...

The third mystery going on throughout was a flashback sort of thing.  By far the most suspenseful and dramatic of the three, this was the story line that evoked more emotionally.

And that being said, Bury Your Dead is one of the best in the series for me.

Interview with author from end of book: