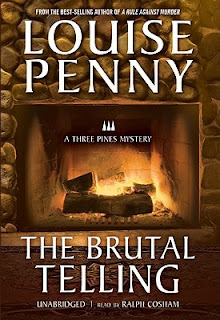 Why this book: It was the next in the series.

So this time the story is set around Labor (Labour) Day.  That's right, we're talking September.  I cannot seem to get on track with this series!

A man is found dead in the Bistro, and nothing but questions surround him.  Who is he?  Who killed him?  What's the weapon?  Why was he killed?  Where was he killed?

Personally, I enjoyed the book.  I like the writing style.  I like Gamache.  And I'm always interested to "see" more of the residents of Three Pines.  As for the mystery, it was really a question of faith (and I don't mean the religious type).  How much do you believe in the characters you've met and grown to "know" throughout the series?  There was a story/legend/myth attached to this mystery.  It was interesting, but personally I would have preferred to hear it all at once instead of broken into pieces throughout the story.

I look forward to listening to the next book, Bury Your Dead.
Posted by Jo at 5:02 PM