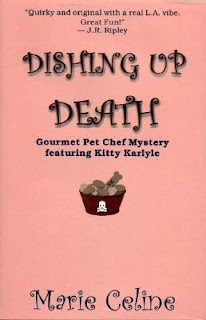 I thought it sounded like a fun cozy.  Plus, there's the pet aspect.

I started this book with high hopes and ended it feeling disappointed.  It actually moved pretty well, pace-wise.  I could pick it up and keep reading.  It wasn't a slow start, I didn't drag through it.

The problem is the characters.  They seem artificial.  Characters make a book for me.  I can overlook plot, some editing, and how realistic or likely the story is.  But if I can't properly like the characters...

Kitty is - I don't even know how to describe her.  She can come across as naïve and child-like in some of her reactions.  But when you think about it, she's running her own business, successfully completed culinary school, and is now investigating a murder.

So how is it that she can be so ignorant when her best friend decides to throw out all the food in her kitchen (Because hello?  She thinks the cops aren't going to want to have access to that for evidence?  And she isn't going to look suspicious?)  Or she goes into people's houses, accepting them as clients willy-nilly without a thought to safety.  And that's something, coming from me.

But there were other things that bother me.  The victim's friend talks about how he wouldn't mind being between her thighs, yadda yadda.  This might not be out of place in another book.  But it jumped out and felt forced here.  I understand the author was saying something about the character, but still.

Then there is the play between the detective and Kitty.  I actually like the detective.  I do.  And his side of things and intentional rushing actually added some humor.  But I did not understand what appealed to him, and I didn't feel any reciprocity or chemistry on Kitty's end.

::sigh:: I feel so frustrated just re-capping all this.  There was just so much potential!  I wanted so much to enjoy this.  And I did to an extent.  But the frustration (especially with the end, which I can't bring myself to talk about) has muted the enjoyment.

This was supposed to be a Cozy Cull book, but the condition (an ex-library hardback, thus with more wear than usual) plus my feelings on the story... We'll see.  I still might.
Posted by Jo at 1:37 AM