That Old Flame of Mine 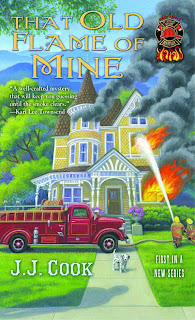 Title: That Old Flame of Mine

I regularly check for new series debuts published by Berkley Prime Crime, then request the library purchase them.  This is one of those.  I decided to read it now over other possibilities due to a review by Kimberlee @ Girl Lost in a Book.

Set in small town Tennessee and featuring the new (temporary) fire chief of the new (hopefully not-so-temporary) volunteer fire brigade, That Old Flame of Mine caught my attention right away.  Add to that the touch of paranormal (a ghost), and the hook dug in further.  I'm not going to gush.  Some aspects - especially where relationships are concerned (potential romantic and others) were a bit to abrupt for me.

But I did enjoy the book.  I liked Stella.  She's a strong and intelligent heroine.  She has a strong background with obvious leadership skills that help make her an appealing character.  And one of the relationships that did feel natural is between Stella and the ghost, Eric.  Once the initial "no-such-thing-as-ghosts" thing was past, they jibed well together.

I did guess the suspect (there were some indications of hinkiness), but I absolutely positively did not guess the why.  It simply didn't occur to me until it was revealed in the story.  I guess you could say I had a hunch, but no proof. =)

There's supposed to be an e-book special out in December 2013 titled "Hero's Journey" about the Dalmatian puppy of the series.  Not sure if I'll be able to read that, we'll see.  Then the full on second book, Playing With Fire, is due out January 2014.  I definitely plan on reading that, especially considering the end of this one (oops, forgot to mention the last minute cliffhanger... though the original mystery is solved).
Posted by Jo at 10:38 PM