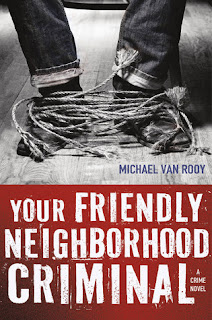 I read the first book in this series, An Ordinary Decent Criminal, for The Canadian Book Challenge 6. I read this one because I wanted to know how things went for Monty after the last book.  The only way to do that (without purchasing it) was ILL.

A smuggling ring is being set up to traffic people (refugee sorts) between Canada and the US, and Monty has been paid to help with making the route secure and the smuggling so quiet as not to be noticed by officials on both ends.  Too bad one of the original crew had a drug problem and a big mouth.  Now others want to use the route for more nefarious purposes (drugs, guns, etc.), and Monty needs to clear this issue up.

I think Monty is slipping. Oh he says he's gone straight, but he's does more and more criminal like activity as he goes. It's as if he thinks, "If it isn't for gain, or if it is for good, it's okay." Mmhm. Right. Nevertheless, I enjoyed seeing how he solves the situations he comes across. I have to say that the violence is pretty up there though. The willingness to torture, etc.  Somehow, despite Monty's tendency toward violence and a character that is so very different (from me and my world) that it's hard for me to comprehend, he makes the story.

Anyway, I have to try the third book, A Criminal to Remember.  But that will be the last since the author, Michael Van Rooy, passed in early 2011.
Posted by Jo at 1:52 PM