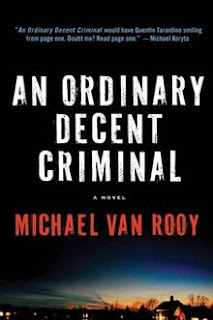 Michael Van Rooy was a Canadian author I discovered on NoveList (unfortunately he passed in 2010).  This is the first of his crime series, and it sounded interesting so I decided to try it.

Monty/Sam is a criminal trying to go straight.  He's moved with his wife and young son to Winnipeg to get a fresh start.  But that's kind of hard to do when you have guys breaking into the house you're renting and you shoot them - all in the first 2 pages of your story.  Monty is arrested and assaulted by the police and can't really lead his new life with this hanging over his head.

The detective who arrested him is set to let everyone know about his past and ruin his start before it's even begun.  And the cousin of one of the robbers he shot is after him to hold up his reputation.  His very first employer fires him after one day's work, and his landlady is trying to have them evicted, and the neighbors don't want him around, and someone's trying to get him to break under his addiction, and, and, and...

So maybe Monty needs to go back to his old ways - just a little - to set things right and make his future possible.

The language and everything else is pretty graphic.  Monty is going straight for his family and new beginnings  - not because of any remorse.  The dust jacket says he's a "antihero who readers will root for against all odds."  I don't know what to think of him really.  I wouldn't say I like him (and I can and do like criminal protags - thieves and assassins and all).  But I did root for him too.  I think it was the justice (or lack) of the thing.  I mean, the man is trying to do things differently, whatever the reasons, and you're gonna mess that up for him?  It riled the part of me that wanted to advocate for prisoner's rights back when (If only I had the nerve to actually speak up - which I don't because I'm terribly shy, really.  But that was a career path I considered at one point.).

The story kind of reminded me of the television show Prison Break, even though Monty's completed his time and isn't even on parole or anything so it isn't the same thing at all.  Anyway, I hope to read the second book, Your Friendly Neighborhood Criminal, because I'm curious how things go for Monty, but I'll have to ILL it, too.
Posted by Jo at 11:31 AM