The Cruelest Month (The Cruellest Month) 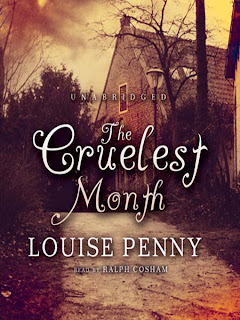 Title: The Cruelest Month aka The Cruellest Month

I dragged myself through this book.  I don't know if it's because I need a break from the series, if it's because I didn't like how that underlying mystery I mentioned with the second book was coming out, if it was Peter's jealousy of Clara's work. (I had a big problem with Peter's attitude.  I was literally shaking my head and saying, "No, no, no," at points.)  Whatever the reason I'm going to take a break now.  Maybe I'll try reading the next one in print.  Shake things up a bit.

But for a bit more about the actual story... The first book is set around Canada's Thanksgiving, the second around Christmas and Boxing Day.  This time it's spring.  Right around Good Friday and Easter, in fact.  Clara's preparing a painting for a big-wig art guy (hence, Peter's jealousy), painted wooden Easter eggs are being prepared for the kids to find and trade in for chocolate, Ruth's caring for a pair of ducklings, a couple séances are being held, and oh, it looks as if someone has been scared to death.

I could have done without Clara's preparation of her art (for reasons mentioned above).  The spring atmosphere just didn't click with me the way fall and winter did in the previous books.  Maybe it was the muggy summer heat I was walking in while listening to most of this.  Anyway, Ruth was, as always, great.  The ducklings only added to that.  And the mystery was fine.  It tended to be overwhelmed by everything else that was going on with Gamache and his team, though.

There was one bit of philosophy I found particularly intriguing in the book, and it plays out in the conclusion (I don't think that's giving too much away).  There's an idea of a "near enemy" where one negative emotion is passed off as a positive.  The examples mentioned are Love (positive) vs Attachment (negative), Compassion (positive) vs Pity (negative), and Equanimity (positive) vs Indifference (negative).  I found this idea interesting and had to play with it a bit, considering who might fit what under what circumstances.
Posted by Jo at 7:25 AM