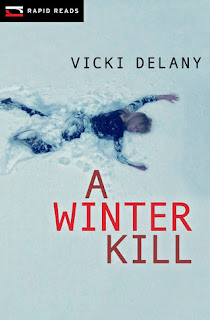 I had to read this book for a number of reasons.  It's another Canadian book (set in Ontario).  It's by the same author that writes the Klondike Mysteries I've been reading.  And it's a Rapid Read.  I know I've gone on about Rapid Reads before, but I'm going to do so again.  I just love the idea of a line of books for adults with literacy issues and reluctant readers.  I admire the line and the authors who write for it.  You can imagine how excited I was when I discovered one of the Canadian authors I've been trying out recently had written a book for this line.   So I requested the library purchase it.

This was actually a little different than some of the Rapid Reads I've tried so far.  Instead of being a story that takes place in a shorter amount of time, the story does take place over days.  I suppose this actually makes the investigation more realistic.  It was also different from the Vicki Delany books I've read so far as it's a contemporary mystery.

The primary character, Nicole Patterson, is likable enough.  I did like her more before her primary interest/motivation in the case was revealed.  Said interest was relevant to the times and showed a fallibility that made for more realism in what seemed to be unrealistic investigation by someone so low ranking in law enforcement.  But it was one of those things that, once discovered, you want to distance yourself from.

Overall, the story was a quick read.  This was especially convenient as I've found it incredibly difficult to concentrate on reading recently.
Posted by Jo at 10:48 PM