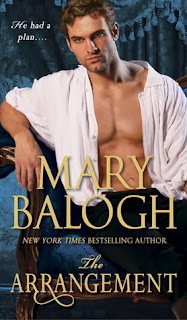 I saw it somewhere - I think Wowbrary, though it could have been a blog - and it sounded intriguing.

Each of the Survivors have their wounds from the war - whether physical or mental/emotional - and Vincent's are among the more obvious.  He is now blind.  (Though not scarred or marked.)  Somehow, his many female relatives have decided that this means he is somehow incapable or caring for himself and have taken it upon themselves to find him a wife to take care of him.  Gag.  So Vincent runs off, only to find himself further ensnared in his relatives long reach.  He escapes via an arrangement with a lady (in something like the Cinderella role).

I liked Vincent, though I don't understand what could have taken him so long to see how deep he was getting into things with his relatives.  And I really liked Sophia.  Underneath her invisibility and withdrawn ways, there is a strong woman.  Certainly a go-getter when it is put to her.  And I admit, I got emotional when she misconstrued something she overheard Vincent say.  Even though I knew that she was misunderstanding, I still felt wretched for her.  (Oddly enough, the same thing happening in reverse to Vincent did not inspire such depth of feeling in me.)

Of course the end brings a HEA (happily ever after).  Which makes me happy.  And I hope to read the third book, The Escape, when it becomes available.  And apparently there was an e-novella, "The Suitor," between The Proposal and The Arrangement that I missed.  I'm on hold for that.

I didn't know it at the time, but this author is Canadian - she resides in Saskatchewan.
Posted by Jo at 11:04 PM