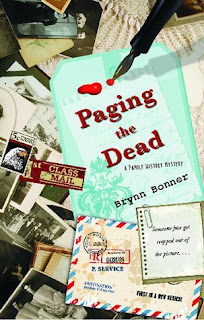 I saw it on Wowbrary (new items the library's purchasing); it's a series about family history, which I have an interest in; it's a cozy mystery which I have a fondness for.

I took a little longer than I had expected to get into this, but the story was decent.  Sophreena and her business partner Esme have a client who is murdered on the same day they visit her.  Are they suspects?  And will they still be paid for the whoppin' big project they were hired to do?  Was it robbery?  And who didn't have something against the victim?  And what is the victim's long-dead grandmother trying to tell Esme? (That's right! A paranormal aspect... though not much seen on the part of the reader.)

I figured out things before the big reveal, but it was in the last fourth of the book, so not too soon.

A lot of information about tracing you family history is available via Sophreena who is prone to lectures on the subject.  It was a tad info dump, but I can use the information so I accepted it.  Sophreena also has a quirk where she spits out current history facts about a year (president, popular music and movies, other big events), and I have to be honest I was a little jealous of that, even if it didn't come across as particularly natural.

Note: From the author's credits page, it seems this book was originally to be titled Death by Design.  I'm glad that was changed. I've heard it before and Paging the Dead fits much better.

As for the characters, well.  I wasn't instantly attached and charmed, but I have a feeling they'll grow on my as the series progresses.

Overall, the book wasn't everything I hoped, but it was pleasant enough.  And yes, I intend to continue with the series.  It seems the second book is to be titled, Photos and Foul Play.
Posted by Jo at 8:39 AM