A Rule Against Murder (The Murder Stone) 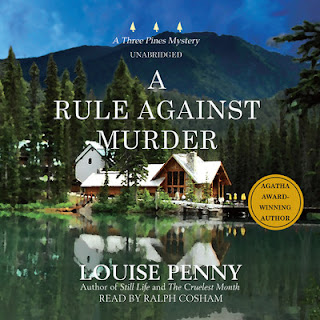 Title: A Rule Against Murder aka The Murder Stone

I cannot seem to read this series in the right season.  Armand Gamache and his wife are celebrating their anniversary at the same lakeside retreat, Manoir Bellechasse, they go to every year.  As their anniversary falls on Canada Day (July 1), it's very much summer and hot.  (Unlike here were it is, though mild for winter, still snowy or icy or at least slushy - please I'll take snow over slush any day.)  But this year is different from previous anniversaries.  This time there's a murder.  As it turns out, Three Pines is just a stone's throw away, so we get a brief glimpse of the characters introduced in the three preceding books.  But really, character-wise, this book most offers a chance to become more familiar with both Armand Gamache and Peter Morrow.

As for the mystery, there's the usual range of suspects, from the family of the victim to the staff of the Manoir Bellechasse.  But this time the real question isn't as much who (though that IS a question) or why (ditto) but HOW?  I did not guess the how.  But I did have a feeling which clues were important, just not why they were important.  And I didn't guess the murderer.  And I'm incredibly frustrated that the unisex (as in the gender is a secret) child of the victim's family was STILL a secret at the end of the book.

Anyway, maybe if I speed up my listening I might manage to catch up to the proper holiday/season.  Book five is The Brutal Telling.
Posted by Jo at 8:11 PM